The Eyam Plague of 1666: A System Dynamics Model

At present the news is full of the rather frightening Ebola outbreaks in West Africa. Other infectious diseases also get into the news often, for example AIDS/HIV and flu. What is less well know is that such infectious diseases spread according to fairly precise mathematical rules. This follows from the person-to-person contact involved in the spread of the disease.

It is this process that the limited enthusiasm hypothesis of the church growth models is based on. In that case the “disease” is faith, and it is spread by word of mouth contact. It is not only churches that grow this way, the same epidemiological mechanism has been used to model the spread of languages, scientific ideas, riot behaviour, bulimia, cigarette smoking and even Facebook [1].
To illustrate how this principle works I want to use a standard case study in mathematical epidemiology: the spread of the plague in the Derbyshire village of Eyam in 1666.

The years 1665-1666 saw the great plague hit England, notably London, which lost about 15% of its population [2]. This was the last epidemic of bubonic plague in the UK, a disease that had been an ongoing problem since the days of the Black Death in the 14th century. The primary mechanism of spread of the disease is through the bite of an infected black rat flea. However once established the disease can spread person-to-person, which gave rise to the popular rhyme “Ring a ring of roses, a pocket full of posies, atishoo, atishoo, we all fall down” [3].
Although largely confined to London, an outbreak occurred in the Derbyshire village of Eyam due to a person acquiring the disease from a piece of infected cloth sent from London in 1665. Once the Eyam outbreak took hold in 1666 the local clergyman took the precaution of isolating the village, as best he could, to prevent the spread of the disease. This action of his made it an ideal case study to mathematically model the spread of a disease, as migration could be ruled out as a major mechanism in its spread.
Such a mathematical model of the plague was carried out by GF Raggett [4] using methods based on differential equations. Raggett explained why the spread of the disease in Eyam must have been largely person-to-person rather than rat fleas, as over the period of a year infected rats would have left the area and infected the wider area. No such cases occurred. Using mathematics Raggett then showed how the model predicted the number of deaths due to the epidemic, and demonstrated some important results [5].
What follows is a system dynamics version of Raggett’s work to help explain how a disease spreads without using mathematics. The model is often called the SIR model, after the symbols in the equations, the epidemic model, or the Kermack McKendrick model, after the first people who published it [6].

The model assumes the population of people are split into 3 categories of people: the Susceptibles, who could potentially catch the disease; the Infected, who are carrying the disease and could infect others; and the Removed who have had the disease and cannot catch it again, either because they are cured and immune, or have died. The letters SIR stand for these three categories.
In system dynamics this model can be expressed as stocks and flows:
The removed category has been renamed Deceased as most cases of bubonic plague ended in death.
There are two processes (called flows) involved: catch the disease, which moves susceptibles into infected; and deaths, which moves infected into deceased.
The catch diseaseprocess is subject to two social forces: R1and B1. R1 causes the increase in the number of infected to accelerate as more infected gives more new cases each day, thus more infected. This is called reinforcing feedback and is the first phase of growth in the infected, (figure 2).
In addition the force B1slows that growth as the pool of susceptibles is depleted, making it harder for infected people to make new cases. This slowing force is balancing feedback and opposes the force R1. B1 eventually dominates over R1, the second phase of growth (figure 2) [7].
Eventually the number who catch the disease drops below the deathsand B1 now causes the infected to decline faster and faster, the first phase of decline (figure 2).
The deaths process is subject the social force B2 as the more infected there are the more die, thus depleting their numbers. This force only dominates at the end causing the decrease in infected to slow down, the second phase of decline, (figure 2).
Raggett [4] showed from the recorded deaths that when the main period of the plague epidemic started, June 19th 1666, there were 7 people infected. The population was known to be 261 at that time. By the end of the epidemic, in the middle of October that year, only 83 people had survived.
From these figures, and knowing the infectious period of the plague is about 11 days, it is possible to simulate the system dynamics model, and compare it with the data for cumulative deaths (green curve, figure 3) [8]. Comparing Deceased with recorded deaths shows a good fit. It is remarkable that something that involves people, and random behaviour, gives such predictable results. This predictability is what allows modern day epidemics to be so successfully tackled, and the consequences of not tacking action computed [9].
Note the following:
1. The epidemic burns out before everyone gets the disease. There are susceptibles remaining at the end of the epidemic (black curve figure 3).

2. At the peak of the epidemic, where the number of daily cases is at a maximum (about 45 days, figure 3), even though the daily death rate is slowing down the epidemic is not at an end and a significant number of deaths are still to come, (green curve figure 3).

3. At any one time the number of infected people is quite small compared with the population (blue curve, figure 2 and figure 3). It is their cumulative number over time that is large. It does not take many infected people at a given time to keep an epidemic going [10].

The strength of an epidemic is measured by the reproductive ratio, called R0. At its simplest it is the number of people one infected person could potentially infect during their infectious period, if the whole population were susceptible [11]. The number has to be bigger than one for an epidemic to happen. The larger this number then the bigger the epidemic becomes. Different diseases have different reproductive ratios [12].
Using the numbers above, the reproductive ratio comes out at about R0 = 1.6 [13]. This is much less than highly infectious diseases such as Measles (range 12-18) and Smallpox (5-7) [14]. Nevertheless 1.6 was still large enough for well over half the population of Eyam to get the disease. A value of R0 of 1.6 is similar to Ebola (1.5-2.5). However because Bubonic Plague is spread through fleas, and through the air, it is harder to take action to reduce R0 compared with Ebola, which is only spread through contact with bodily fluids.

What turned out to be an ideal case study to test a mathematical model for the spread of a disease turned out to be a tragedy for the people of Eyam. The majority of the population died, including the wife of the brave clergyman who isolated the village and performed all the burials [15]. However his action saved many more lives of people in the region, and the lessons learned, which mathematicians can now explore, gives confidence to models that have given strategies to combat epidemics and save millions of people. That studies of this sort can help understand social diffusion processes such as religion is a bonus.

[1] For a selection of social modelling papers that use the epidemic/disease analogy see references at:
http://www.churchmodel.org.uk/Diffrefs.html
[2] National Archives http://www.nationalarchives.gov.uk/education/resources/great-plague/
[3]  For a history of the Great Plague of London see Wikipedia
http://en.wikipedia.org/wiki/Great_Plague_of_Londonand the references contained within.
[4]   Raggett, Graham F. “Modelling the Eyam plague.” Bull. Inst. Math. and its Applic 18, no. 221-226 (1982): 530. http://math.unm.edu/~sulsky/mathcamp/Eyam.pdf
Note Raggett used the burial records to estimate deaths. There is a slight time delay between the two, but not enough to seriously affect his results.
[5] For a history of the Eyam plague see:
Wallis, Patrick. “A dreadful heritage: Interpreting epidemic disease at Eyam, 1666–2000.” In History workshop journal, vol. 61, no. 1, pp. 31-56. Oxford University Press, 2006.
http://eprints.lse.ac.uk/22546/1/0205Wallis.pdf
For the demography of the Eyam plague see:
Race, Philip. “Some further consideration of the plague in Eyam, 1665/6.” Local population studies 54 (1995): 56-57.
http://www.localpopulationstudies.org.uk/PDF/LPS54/LPS54_1995_56-65.pdf
[6] Kermack, William O., and Anderson G. McKendrick. “Contributions to the mathematical theory of epidemics. Part I.” In Proc. R. Soc. A, vol. 115, no. 5, pp. 700-721. 1927.
http://www.math.utah.edu/~bkohler/Journalclub/kermack1927.pdf
[7] The structure of the feedback loops, or forces, on those who catch the disease can be broken down into a number of parts where it is assumed the populations are proportionally mixed. The connection between population density and the likelihood of contact requires further assumptions.
[8] The model was constructed and simulated in the Software Stella, available from ISEE Systems http://www.iseesystems.com/.
[9] Similar models for Ebola in West Africa, 2014, have already been constructed and are informing policies to reduce its impact. For example:

[10] All these epidemiological principles are replicated in church growth, and other forms of social diffusion. Not all people in a population are converted. Substantial church growth still comes after the peak in the growth is over. At any one time there are very few infected, called enthusiasts, spreading the faith.
[11]  The reproductive ratio (or reproductive number)  is called the reproduction potential in church growth and measures how many people one enthusiast can potentially convert and make an enthusiast. Not all converts become enthusiasts.
[12] For most diseases the reproductive ratio is given as a range as its value can depend on population density and particular population behaviours. It is believed that Ebola in West Africa in 2014 started with a much higher than normal R0 due the particular burial practices used, allowing dead bodies to transmit the disease, thus extending the infectious period.
[13] A simple formula can be used to compute the reproductive ratio in terms of the population number, and initial and final number of susceptibles alone. This calculation was done in the software Mathcad: 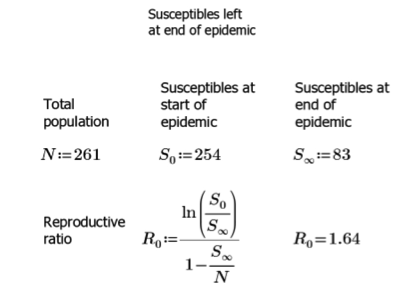 For the computation of this formula for the reproductive ratio see:

Brauer, Fred. “Compartmental models for epidemics.” (2008). http://health.hprn.yorku.ca/epidemicnotes.pdf
There are numerous methods to compute the ratio, sometimes giving different answers, see [14] below. This is not an exact science.
Mathcad is available from http://www.ptc.com/product/mathcad
[14] Wikipedia and references within. http://en.wikipedia.org/wiki/Basic_reproduction_number
[15] There is a museum in Eyam where the visitor can learn about the outbreak. http://www.eyam-museum.org.uk/Note that there had been cases and deaths in 1665 and early 1666 before the period of study used by Raggett starting June 19 1666. Thus the total deaths, and the original village size, are larger than used in Raggett’s study.